Thin White Sauce, The Boston Cooking-School Cook Book, p. 266
2 tablespoon butter               1 cup scalded milk
1 1/2 tablespoons flour         1/4 teaspoon salt
Few grains pepper
Put butter in saucepan, stir until melted and bubbling; add flour mixed with seasonings, and stir until thoroughly blended. Pour on gradually the milk, adding about one-third at a time, stirring until well mixed, then beating until smooth and glossy. If a wire whisk is used, all the milk may be added at once.

Toasted Fromage Rolls, A New Book of Cookery, p. 45
January 5, May 25
Cut fresh bread while still warm in as thin slices as possible, using a very sharp knife, and remove crusts. Work butter until creamy, add an equal measure of grated Young American cheese, and work until thoroughly blended; then season with salt and paprika. Spread bread with mixture and roll each piece separately. Toast over a clear fire and serve hot with the salad course.

Toasted Triangles, A New Book of Cookery, p. 77
January 10
Cut stale bread in one-eighth-inch slices and remove crusts; then cut in halves on the diagonal, making triangles. Toast under a gas flame or bake in a slow oven until crisp and delicately browned. 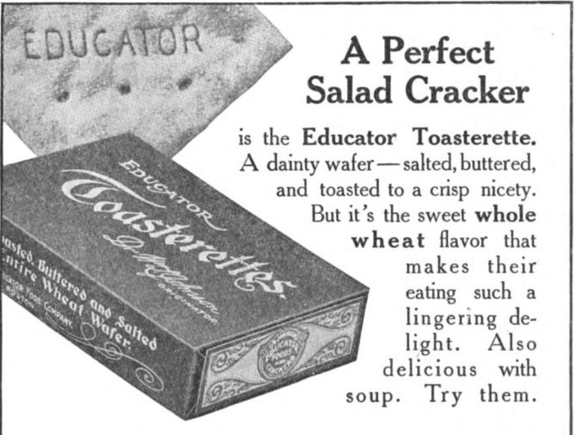 Toasterettes
April 12, May 31
Toasterettes were a brand of whole wheat cracker made by the Johnson Educator Biscuit Company, a cracker company in Boston. Fannie Farmer specifically endorsed the company and they advertised in her cook book.

Tomato Jelly Salad, The Boston Cooking-School Cook Book, p. 334
March 25, March 29, May 12
To one can stewed and strained tomatoes add one teaspoon each of salt and powdered sugar, and two-thirds box gelatine which has soaked fifteen minutes in one-half cup cold water. Pour into small cups, and chill. Run a knife around inside of moulds, so that when taken out shapes may have a rough surface, suggesting a fresh tomato. Place on lettuce leaves and garnish top of each with Mayonnaise Dressing.

*Tomatoes Stuffed with Pineapple, August 18
Peel medium-sized tomatoes. Remove thin slice from top of each, and take out seeds and some of pulp. Sprinkle inside with salt, invert, and let stand one-half hour. Fill tomatoes with fresh pineapple cut in small cubes or shredded, and nut meats, using two-thirds pineapple and one third nut meats. Mix with mayonnaise or cream salad dressing. Serve on a bed of lettuce.

Turkey Soup, The Boston Cooking-School Cook Book, p. 120
January 7, March 24
Break turkey carcass in pieces, removing all stuffing; put in kettle with any bits of meat that may have been left over. Cover with cold water, bring slowly to boiling-point, and simmer two hours. Strain, remove fat, and season with salt and pepper. One or two outer stalks of celery may be cooked with carcass to give additional flavor.

*Turkish Pilaf, October 24
February 14, May 22
Wash and drain one-half cup rice, cook in one tablespoon butter until brown, add one cup boiling water, and steam until water is absorbed. Add one and three-fourths cups hot stewed tomatoes, cook until rice is soft, and season with salt and pepper.