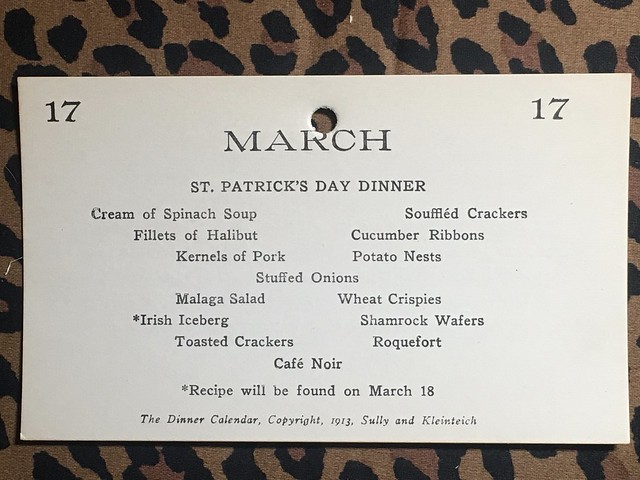 No corned beef and cabbage here! We do have some green foods and thematic desserts. Cream of Spinach Soup, Cucumber Ribbons, and Malaga Salad are all various shades of green. You’re also supposed to tint the lemon ice for the Irish Iceberg with leaf green. You also pour crême de menthe over it presumably the green colored version.  And serve it with Shamrock Wafers.

I don’t know how the halibut fillets are suppose to be prepared, so I leave that up to you.

The Potato Nests are supposed to be filled with something. Maybe the Kernels of Pork?

Malagas are white grapes, which, of course, means that they’re green.

There are three different kinds of crackers served with this meal! Souffléd Crackers (with the soup) are made with common crackers, Wheat Crispies (with the salad) are a commercial brand, and toasted crackers  (with the cheese) could be almost anything. 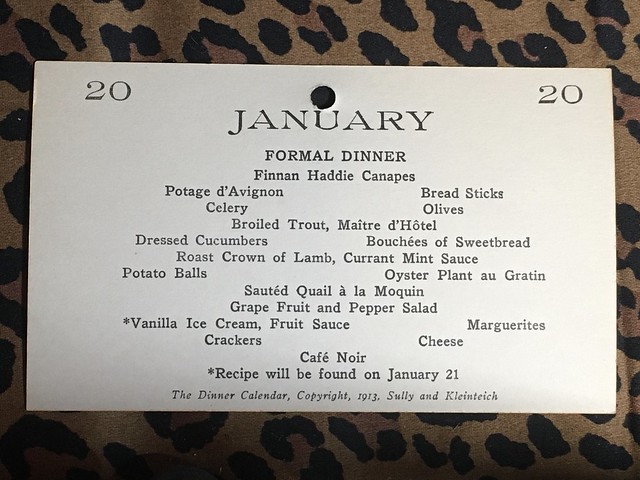 In 1914 January 20 was a Tuesday. Why are we having a formal dinner on Tuesday? It’s my sister’s birthday and that’s a good enough reason for me.

There is a lot going on in this meal…

Finnan Haddie is cold-smoked haddock. Our local butcher shop carries it, so I should give it a try.

The Potato Balls are shaped with a French vegetable cutter. They were used to cut fruits and vegetables into ball shapes, but I have yet to find an image of one, let alone an actual cutter. Let me know if you’ve ever seen one!

Oyster Plant is a common name for salsify and according to Fannie Farmer “Oyster plant is in season from October to March.” I haven’t found a recipe for Oyster Plant au Gratin, but you could probably make Potatoes au Gratin and substitute salsify root. Fannie Farmer says to cook it so: “Wash, scrape, and put at once into cold acidulated water to prevent discoloration. Cut in inch slices, cook in boiling salted water until soft, drain”.

Quail à la Moquin is presumably named after restauranteur Henri Mouquin. Mouquin came to New York from Switzerland, via Paris, and began his career as a waiter at the famed Delmonico’s. Mouquin opened three restaurants in New York, with his wife, Marie Granjean as chef. She is credited with introducing French onion soup to the United States.

There are two recipes for Marguerites in The Boston Cookery-School Cook Book. Both look like sweet little treats. One is a pastry and the other is more like divinity, but baked on saltines!